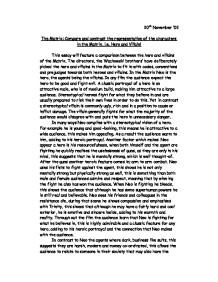 David Hajdu's new collection, Heroes and Villains , is packed with shrewd, original observations about subjects ranging from Elvis Presley to Elmer Fudd, from Kanye West to well, whattaya know Taylor Swift. Over the past decade, Hajdu has established himself as an ambitious, wide-ranging critic and biographer. The essays in Heroes and Villains are most often critical assessments mixed with biographical sketches, a rare form in this time of the short review and the widespread assumption that readers will be confused upon encountering an actual opinion in the midst of a profile.

Hajdu is the rare first-rate critic who's also a first-rate interviewer—he's rarely interested in putting his own opinions ahead of the stated intentions of the artist under discussion. If the critical appraisal is at odds with the good quote, he lets both stand, and a fresh tension is the result. In writing about Joni Mitchell, for example, Hajdu reports that the singer-songwriter insisted to him that she'd always been a jazz artist, never a folk singer, a notion Hajdu takes quiet but firm issue with in proceeding to give a brief but thorough overview of her career, tracing her yes folk period, her jazz period, and her subsequent electronic experiments and, most recently, her re-recordings of some of her best-known songs.

It takes a hardy critic to plow through much of Mitchell's latterday work, and Hajdu listens to this music with a typical clear ear canal. In his introduction, David Yaffe compares Hajdu to Otis Ferguson and Edmund Wilson, and I would add that he's also working in the tradition of Gilbert Seldes or Robert Warshow, cultural critics who took the long view without standing aloof from pop culture. Hajdu's writing is always generous.

Even when he's listening dubiously to Josh Groban "a wondrously strange living amalgam of imposed ideas about pop artistry, most of them fearsomely cynical" , he can find time to describe his voice as "an airy, robust baritone… an impressive instrument well employed to impress.

Now that's a good critic. He described B's sound as the "greatest feeling I ever had in my life—with my clothes on. The title of Heroes and Villain's lead essay, "The Man Who Was Too Hot," is a double entendre for Eckstine's music; B rejected the orchestrated precision of big band music, and his sound was a forbearer of bebop "jerky" and "over-stylized" said Variety in The title's second meaning is for the handsome Eckstine's status as an unapologetically romantic, black sex symbol whose appeal to white women ultimately ruined his career. Hajdu, the music critic for The New Republic and a professor at the Columbia University School of Journalism, mainly focuses on the latter implications of his title: how a double-page photo in Time magazine sabotaged Eckstine's career.

The photo in question depicted shrieking white women perhaps part of fan clubs "Girls Who Give In When Billy Gives Out" or "The Vibrato's Vibrators" clawing at the musician, and it found B barred from clubs and compromised his once-promising Hollywood film contract—downgrading it to a few peripheral roles that were edited out for Southern versions. Yet Eckstine's musical tragedy, of being too hot, is a uniting theme of Hajdu's work, which in its best moments explores the edges of musical and cultural classifications and formally defined eras.

Eckstine's sensibilities were too hot for what was desirable in the s and s, while his talents—as a voice and band leader, but not a musician who could actually play bebop or rock and roll—were too limited for the eras that followed.

Interpreting what to make of this cultural edge between eras, or even what to call it—bop? Following the deaths of Bo Diddley and Les Paul this summer and last, it's obvious that we still greatly misunderstand the music of their particular edge, on which Eckstine was a fellow traveler. Diddley in his obituary, or thematically in the case of Paul, who stymied deejays everywhere when it came to proper musical tributes to play the plain and popular duets with his wife; the restrained, shackled riffs behind Bing Crosby; or the rarely recorded experimental stuff that made him a legend?

Their misunderstood era and countless others are fertile ground for Hajdu. His other essays examine subjects such as the American songbook and Mos Def, a multi-platform talent overshadowed by hip-hop's rise to mainstream status; the flashbulb life of the enigmatic Bobby Darin; the dual racial and musical lives of Sammy Davis Jr. Each is a well thought-out query into being too hot for the contemporary yet unable to invent the future.

Hajdu's affinity for comic books read his The Ten-Cent Plague makes appearances in the book, but Heroes and Villains is principally about music. Hajdu writes with clear authority and always has the correct reference, quote or example at hand. His strong referential style—bringing in obscure, far-flung yet meaningful examples and corollaries—is like a grown-up Chuck Klosterman, minus the cocaine.

He doesn't need to take controversial positions to prove his knowledge he affirms Revolver as a better record than Sgt. Pepper ; and his humor is subtle: A chapter on the music played in Starbucks begins with the line, "About 50 years ago, when the Soviets who survived Stalin began to accept the gift of his death, the state's cultural overlords started to loosen their choke hold on the country's music.

Each essay is under 10 pages and accordingly succinct. Yet the individual pieces, whether on Alan Lomax or Sting or Philip Glass, have a depth of research and information evocative of Eckstine's musical signature: speedy bebop that packs dozens of quality sounds into a bar the audience only expects four of five notes from.

Heroes and Villains is dense, but it's hot. I don't ordinarily review collections of essays, especially collections of previously published essays, but I don't want to miss the chance to tell readers just how interesting and accomplished a cultural critic David Hajdu is, and this, his first collection, is as good a place to begin as any. Where Hajdu excels is in his ability to deal not just with acknowledged cultural forces; there are essays here on Ray Charles nobody more central to the history of American popular music , Woody Guthrie, Elvis and John Lennon, but with figures generally viewed at the margins as well, conferring centrality upon them.

But a double-page spread in Life magazine in changed all that. It showed the Adonis-handsome singer surrounded, Elvis-like, by worshipful girls — worshipful white girls.

That more or less put paid to a career that was promising movie celebrity as well. So, too hot sexually, and too black; too hot musically, as well, since Eckstine straddled the edges of the big-band era and cool bebop, of which he was a pioneer his own band was like an all-star team: Charlie Parker, Dizzy Gillespie, Dexter Gordon. It's a sad and moving tale, spun out elegantly by Hajdu in a mere 15 pages. Here's a taste:. It's tempting to indicate Hajdu's range and temperament by quoting extensively; there's no better way to convey the flavour of his work. But I'll limit myself to a few, chosen not quite at random.

Of the great Ray Charles, he writes that although he played piano "with the discretion of a sympathetic accompanist," his singing was "orchestral. He rarely sang any note dead on pitch, but preferred to work in shades of microtones around the centre. Of consummate jazz diva Anita O'Day, who also drained the jazz life to its lees, he writes: "Boredom was the one thing that was intolerable to O'Day.

Her music was the manifesto of her devotion to kicks at all costs. Ecstatic, indulgent, risky, excessive, and volatile, it was drug music, improvised in a state of simulated euphoria and imagined immunity.

Of Elmer Fudd yes, that Elmer Fudd , whose "head is a fruit bowl of round shapes: honeydew cheeks, plum nose, cantaloupe eyes on a blue-ribbon crenshaw head," Hajdu writes: "In the s, Looney tunes' creative use of Elmer as a negative force, a character through whom given ideas could be discredited by ridicule, approached cultural insurgency.

Hajdu writes always with fluency, wit and a confident mastery of his subject. Which is not to say there's anything of the know-it-all about him. Within that ease is a constant sense of generous discovery. I've been reading this work compulsively for several days now. Go thou and do likewise. I hate jazz. The music leaves me cold—yet perversely, I love the idea of jazz.

I love the image of hip, swinging, subversive people who live by their own rules, who revel in melancholy, who blow sexy, dangerous notes in out-of-the-way places. But I'm ready to give the genre a second chance, thanks to the wonderfully lustrous and effortlessly instructive essays in David Hajdu's sparkling new collection, " Heroes and Villains : Essays on Music, Movies, Comics, and Culture" Da Capo.

The time on the city's South Side inspired him to write "A Hundred Years of Blues," one of the very best essays in this estimable gathering. The city noses its way through many of these marvelous pieces the way the Chicago River threads itself under the succession of little bridges, all cool and blue and easy. In an appreciation of singer Dinah Washington, Hajdu notes that she was born in Alabama but grew up in Chicago in the s "when the city was a hothouse of jazz, blues and gospel music, all three of which had also been transplanted from the South not long before then.

He makes you want to rush out and get hold of the music about which he writes, no matter what you may have thought about it in the past. Clearly, you weren't alert to "the fire, the tension, and the surprise," in Hajdu's words, that this music kindles when it wants to.

And then there are the essays on other topics, such as rock music, comic books and cartoons. His essay on Elmer J.

Fudd is a brilliant treatise on an animated anomaly. In this collection, David Hadju presents a range of reflective, analytical assessments of key figures in the history of popular music. He thought that he was the victim for going away and leaving his sister Margaret. As soon as Walton hears about that Victor Frankenstein has abandoned the creature, he realises that the creature is the victim, also Walton realises that going leaving his sister was a bad idea, making him feel like a villain in the end.

This outburst of self-pity as the creature questions the inequality of how he has been treated, giving Walton and the reader a glimpse into the suffering that has caused his evil acts. This also shows that the creature is an unwanted life, a creation abandoned and left alone by his creator. The way in which society judges him makes the creature feel more abandoned and hurt then he already is, furthermore he had to learn things about life in his own ways, so it is not entirely the creatures fault for all his evil acts.

If we say that the creature is the victim and then we have to call Frankenstein the villain. The villains in the novel are Victor Frankenstein and the creature itself, but they can also be Heroes in different ways. Victor Frankenstein could be seen as a villain as he tries to do something which is out of his control and creates a hideous creature to life. Though ripped apart by remorse, shame and guilt Victor refuses to admit to anyone the terror of what he has created. 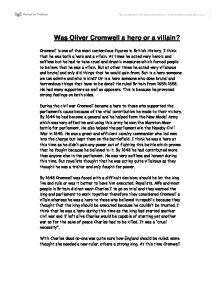 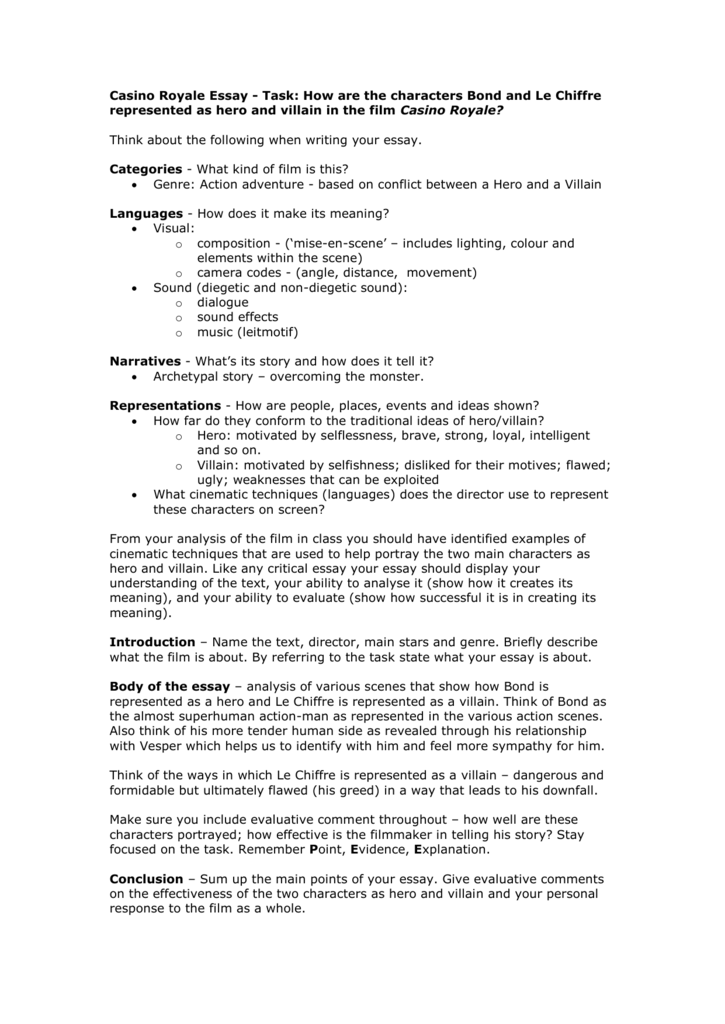 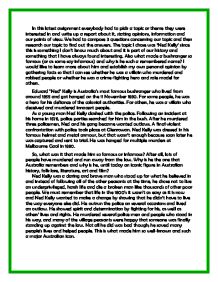 Related essays on heroes and villains