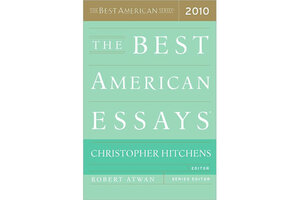 Thanks for telling us about the problem. Return to Book Page.

Showing Average rating 3. Rating details. Sort order. Nov 21, David rated it it was ok Shelves: read-in , anthologies-and-collections. Of all the anthologies appearing annually under the "Best American" rubric, the one whose quality appears most highly dependent on the particular choice of guest editor is the "Best American Essays" collection. Just compare the and collections, edited respectively by David Foster Wallace and Adam Gopnik, to see just how much difference a guest editor can make DFW leaves Gopnik in the dust, unsurprisingly.

So I was somewhat reassured to see Christopher Hitchens as this year's invited Of all the anthologies appearing annually under the "Best American" rubric, the one whose quality appears most highly dependent on the particular choice of guest editor is the "Best American Essays" collection. 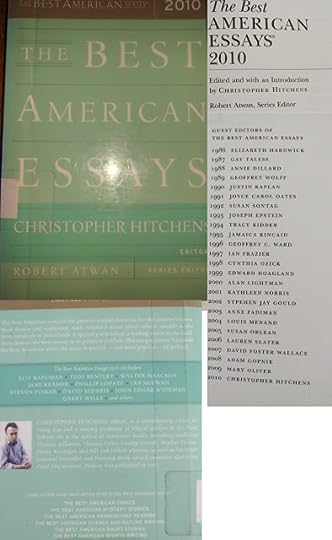 So I was somewhat reassured to see Christopher Hitchens as this year's invited editor. After all, Hitchens can be regarded as a kind of literary Simon Cowell -- someone who projects the image of being way too self-satisfied with his own gleefully obnoxious persona, but who's nonetheless possessed of reasonably good judgment, with a refreshing unwillingness to suffer fools gladly.

Do I Contradict Myself?

Although one might be repelled by his personality, the chances of his serving up a plateful of dud essays seemed remote. At the very least, he seemed likely to have high editorial standards and a broad range of interests. So I had high hopes for this year's anthology. Which were, unfortunately, not quite met.

The collection of "best" essays is not a complete failure. But there were many pieces that simply failed to take off, in that the reader could only observe the writer's passion for his subject, but was never moved to share it "Brooklyn the Unknowable", "Rediscovering Central Asia", "Gettysburg Regress" all proved too soporific for me to finish. And I remain puzzled as to the reason for including the longest essay in the collection, a page profile of former Washington DC mayor, Marion Barry, whose relevance in would appear to be non-existent.

Retired ophthalmologist John Gamel's beautifully written piece "The Elegant Eyeball" was spoiled for me by being about a decade behind the times as far as available treatments were concerned.

I thought Zadie Smith's recent essay collection Changing my Mind was astonishing, but "Speaking in Tongues" is not the essay I would have singled out for inclusion here. Fans of David Sedaris will be more delighted than I was by inclusion of his piece "Guy Walks into a Bar Car", but my Sedaris-fatigue is well-documented, so your mileage may vary. And this is ultimately what prevents this collection from being anything more than adequate. Perhaps if writers understood that the world of writers and writing is nowhere near as infinitely fascinating to the general reader as it apparently is to them, there would be a greater chance of producing an anthology of pieces that are genuinely interesting.

I thought Christopher Hitchens might have the breadth of vision to produce a genuinely dazzling collection this year. I was wrong. The anthology is not an embarrassment. But neither is it particularly exciting. View 1 comment. Mar 02, Travelin rated it really liked it. I'll admit that I finished less than half the essays, but what I did read was light, funny, and informative.

I've read that you should always read the first and last poem in an anthology, since that's where poets place their best work, and it sounds like invaluable advice for this anthology too. The first essay about "The Murder of Tolstoy" is brilliant and informative satire about Russian studies in academia, although it does go too far in embarrassing old professors. At the same tim I'll admit that I finished less than half the essays, but what I did read was light, funny, and informative. At the same time, this isn't really a collection of American essays. Hitchens, a British guest editor, chooses topics which are quite interesting but slightly obvious to, say, a reader in New York.

It's apparently a truism that people in Manhattan never cross over the bridge to see Brooklyn, etc. I just saw Meg Ryan mention it in a movie , but it took Hitchens to include an explanation of this for non-New Yorkers. Also, I'm glad someone was given a prominent platform to mention that the Brit George Orwell had a strange practice of putting his best turns of phrase in essays, but seldom in fiction. I didn't find "" nearly as grim as "Shooting an Elephant.

Nov 15, Jennifer rated it liked it Shelves: non-fiction. As with any compilation, some essays were definitely better than others. My favorites blended the personal with the public; Gyromancy by Rindo about his own diagnosis of Meniere's disease and the possibility that Van Gogh suffered from it as well and Speaking in Tongues by Zadie Smith about language, being biracial, and the US President were brilliant, five-star essays. Go read them now.


These succeeded, though to a lesser degree than the first two because, again, they blended the personal with the science or history and made an engaging read. The essays I really didn't care for didn't do that: How Einstein Divided America's Jews by Isaacson read like a very dry chapter from a very dry history of early 20th century Zionism; Me, Myself, and I's Kramer exploration of the father of the essay, Montaigne, was sadly lacking the personal, too so ironic, I know!

And the essays on Updike, Orwell, and Buckley, though well written, are really only for already-existing fans.

source So a mixed bag, but on the whole interesting. Apr 08, Holly rated it liked it Shelves: reads. No wooly-minded gushing ruminations on nature here, no sir!. Maybe Christopher Hitchens thought Mary Oliver's essay selections were too soft last year. I'm not usually one to complain about how many women are included in anthologies, but with just 5 of 21 essays by women, plus all the encomiums from male writers to male writers here, I was getting a definite masculine vibe.

Just checked my other editions, though, and they're just as lopsided, although I don't recall noticing this before. Batuman on attending an academic conference at Tolstoy's home: my favorite piece from her collection The Possessed. Hitchens's intro mentions the essay's "quiddity" - and that is a nice word for Batuman's refreshing sensibility. Churchon on pronouncing people dead: yes, okay.

Gamel on opthamology and the "eloquent eyeball": Had to skim lest I were to throw up. I'd have happily read either one independently in a magazine, but not in this annual collection. Isenberg on meetings with Auden, Forster, Empson: pleasing snapshots. Not that the essay itself was so staggering, but just the idea.

Labash on Marion Barry: interesting. McEwan on Updike: Could this really be the best Updike piece published after his death? I'm beginning to realize that most of these essays are so very SAFE.

Pinker on personal genomics: Good, and dovetails with another book I just read on the invention of race. Rindo on living with Meniere's Disease vertigo, etc. Sounds miserable. Sedaris on. I don't know how to paraphrase it. I prefer to listen to him rather than read on the page. Zadie Smith on identity and speech: I'd read this before, back when we were all enthralled with Obama. Starr on Central Asia's tradition of science and philosophy: Informative.

Summers on Gettysburg restoration: I got excited when Summers set out to look at the changing expectations Americans apply to history, but then it's only lightly explored. Wideman on Emmet Till's father and the meaning of race: okay. Wills on William F. Wood on Orwell: A James Wood piece is a fine anchor to any collection. 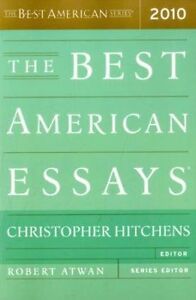